Mongolia: land of Priuses and coal 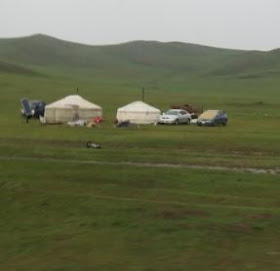 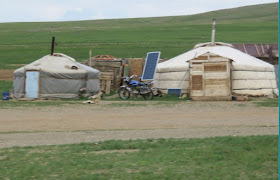 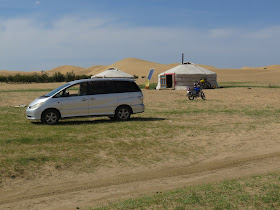 The headline is the answer to where we spent our summer vacation: two weeks in Mongolia, finishing with a week in South Korea.

Lots that could be said. Maybe the most blog-relevant though was the astounding number of Priuses (my favored plural form) we saw in the country, I'd guess they're almost half of the medium-sized and smaller cars on the road, virtually all of them second-hard cars from Japan with retrofitted frames to accept larger wheels for off-roading. Mongolia makes California look Prius-unfriendly.

By contrast to the Priuses, here's a view of air quality in the capital city: 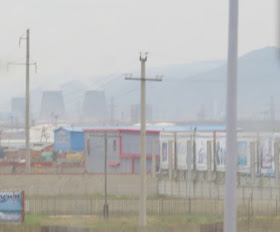 This was in summertime a little over a week ago and our eyes stung within minutes; in winter the air quality is one of the worst in the world, for a city of 1.5 million people. Beijing had better air quality when we flew through there in transit. Most power (80%) comes from the pictured coal power plants. Even worse, the ger (yurt) districts ringing the capital are heated by individual coal stoves, or by wood and trash fuel.

We asked two elderly people in different parts of the country, a woman and a man, about what had changed the most in their lifetime, and both volunteered that it was the climate. Spring is always the dry and dusty season, but in the last 20 years it's been dryer for longer periods. Rains didn't start this year until July, and then came as floods. A country of pastoralists faces huge problems for climate.

With 3 million people, Mongolia doesn't contribute much to climate change, and it's on a good trend with the Priuses. I'd say most of the gers also sported PV solar panels like the one in the first pic; they've replaced generators for limited power needs.

Our guide says motorcycles have only recently replaced trucks as a way to herd animals around. One suggestion then would be the electric motorcycles now coming available could be used along with additional PV panels (and presumably an additional charging battery) to get the nomadic one-third or so of the country off the use of fossil fuels.

By contrast to the rural gers, the village buildings almost never had solar panels, so the fiscal incentives to hook up to coal-powered electricity must be heavily subsidized. I understand the need to do that in the capital, but in the villages it could be changed.

Our guide was shocked when I told him that in the US, wind power is cheaper than coal. He guessed that powerful people in government own the coal mines and have locked in the power contracts. It was windy every place we went to in southwest Mongolia, and there's more where that came from: 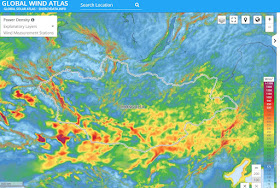 Mongolia's first priority has to be to fix air quality in the capital. The gers are picturesque but have to be replaced with housing connected to sewer and modern indoor heating. Soon they need to make use of this real wind power potential and limit coal. They should also just do everything possible to reduce incentives for people to move there, including decentralizing government functions.

Some other thoughts from the trip:


UPDATE: per the comments, that SUV is Toyota hybrid SUV, but not a Prius SUV. I added a few more grainy pictures of Priuses, but they were everywhere.