One of Life's Little Delingpole Lights or Nature Bites Last


James Delingpole is out there shaking the cup for himself, setting up a gofundme to pay for treatment for chronic lyme disease and a bad overbite.

Here is my Lyme disease GoFundMe https://t.co/iBZly4pYMT Back story is on pt III of this podcast with Dick https://t.co/OMYbf6kTfU
— James Delingpole (@JamesDelingpole) September 1, 2018

Delingpole is a Brit, and the Brits have a National Health Service so why is Delingpole out there with the begging bowl.  Well, it turns out that the right wing climate change denying rags, and Delingpole is an a number one denier of climate change, don't pay so well, and the National Health Service won't.  Why, well chronic lyme is one of those things that you can start a bar fight about at a medical convention.  The quacks don't believe in it and the people who believe they are suffering from it don't believe the quacks.

Well that's fascinating. Delingpole claims he has an illness that probably doesn't exist. That's why the NHS won't treat him and that's why he's trying to raise money from his followers to go the USA or Germany pic.twitter.com/O93WSO462b
— Otto English (@Otto_English) September 3, 2018

It took me 3 months to raise £4500 for the 2nd most lethal cancer. It took James Delingpole 6 days to raise the same: for himself, for a disease that doesn't exist, and maybe for dental work & a holiday https://t.co/5GHXt6wEeH https://t.co/4wIu0ggD4P
— Dr Tamsin Edwards (@flimsin) September 3, 2018

but Eli is laughing his head off.  Why the bunnies ask, enjoyment at the discomfort of others is not becoming they say to Eli.  Well, some not Eli to be sure, might be enjoying Delingpole brought low, but Eli he knows some stuff. 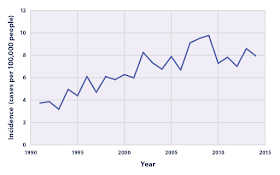 Like lyme disease is carried by a tick.  If you have ever been walking through the north woods, you inspect yourself and your loved ones inch by inch for those buggers if they have dug in because of lyme. Done correctly that can be. . . enjoyable.  Lyme is getting a lot worse.  Indeed the EPA tracks the incidence of lyme. on  a page with the title "Climate Change Indicators: Lyme Disease".  Turns out that the ticks can't survive cold winters, and if the winters are warmer there are more ticks.