Sometime ago Eli created a simple example of how the presence of a colder body can limit the rate at which a warmer one emits energy.  If the warmer body is receiving energy at a constant rate, then the steady state (colliquially equilibrium) temperature of the warmer body will be higher.

Of course this kind of kicks in the nuts arguments about how Uncle Clausius Bunny (he was a Bunny, not a Rabett) said that it was unpossible, even though he said no such thing and was quite aware that warmer and colder objects interchange thermal energy, aka heat, just that more flows from the hotter to the colder so on net, the warmer heats the colder.

Following Izen's lead and a suggestion by Christian Anders, Eli has a stripped down version to break even more heads. 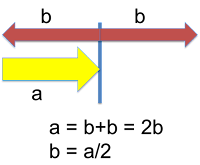 Let's start with a blue plate special and a heat source which constantly transfers an amount of heat a per unit area to the plate.  To maintain a constant temperature the plate then radiates an amount of heat b from each side (yeah, Eli is assuming an really large blue plate, but edge effects are a bitch and if the plate is big enough the heat transfer from the edges can be neglected).  The algebra is trivial and the result is that the blue plate sheds an equal amount of heat in either direction 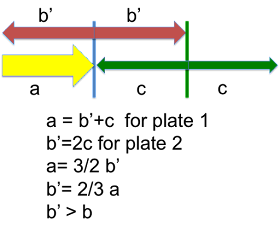 Now let us insert a green plate behind the blue plate.  Working the example through the bunny at the back of the class with his hand up finds that more of the absorbed heat a is radiated from the blue plate b'=2/3a and c=1/3a since a has to equal b'+c

Eli can keep on adding plates, Ms. Rabett has gone out to buy some extras.  Here is the red plate special.  If somebunny works it through they will find that b'=3/4 a, go another plate and, as Christian pointed out, now b' has increased to 4/5 a and so on.

Eli has not said anything about how the heat is being transferred, radiation, convection or conduction but since heat transfer, no matter the mechanism, is always proportional to temperature, the temperature of the blue plate must increase as more plates are added.
EliRabett at 10:25 AM