An evergreen of denial is that a colder object can never make a warmer object hotter.  That's the Second Law of Thermodynamics, so according to the Agendaists, the Greenhouse Effect, with greenhouse gases playing the role of the colder object, is rubbish.  They neglect the fact that heating and cooling are dynamic processes and thermodynamics is not.

Eli, of course, is a dynamic bunny and knows how to add and subtract. Divide is also possible.  What is happening is that one does not have just a hot body and a cold body, but a really hot body, the sun, constantly heating a colder (much), but still warm body the Earth, which then radiates the same amount of energy to space.

In elevator speak, Tyndall put it


[T]he atmosphere admits of the entrance of the solar heat, but checks its exit; and the result is a tendency to accumulate heat at the surface of the planet.

Eli had a different but not as elegant elevator tweet

Today on twitter, Eli stepped through the simple math and he thought it would be a good thing to put the thread on this blog for future reference.  We start with a simple case, imagine the Earth is just a plate in space with sunlight shining on it.   Maybe 400 W/m^2 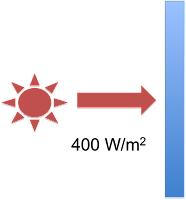 The sun warms the plate, but as the plate warms it radiates until the radiated heat matches the heat being absorbed from the sun 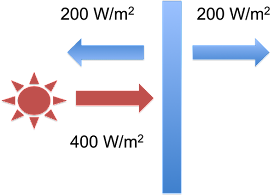 Now lets add another plate. We'll color this plate green for greenhouse. It is heated by the first at a rate of 200 W/m2 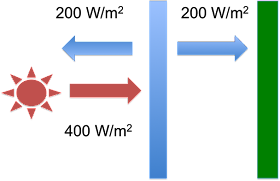 But after a while, it too has to heat up and reach an equilibrium temperature. . . so as a first guess something like

That's wrong though because there are 400 W/m^2 going into the two plate system and 300 coming out.  At equilibrium an equal amount of energy has to be going in as coming out  So what happens??

The bunnies can rearrange the second equation to get

and substitute for σ T24  back into the first equation

Without the greenhouse plate it was 244 K.

Introduction of the second plate raised the equilibrium temperature of the first by 18 K.