There is a sort of  simmering discussion on Twitter and Facebook whether Edith Foote found the basis of the greenhouse effect before John Tyndall.  Eli is here to tell you what was done.  The TL:DR is no, she did not.

Her report can be found on the net in as a Google book,

Katherine Hayhoe describes it this way


In 1856, Mrs. Eunice Foote presented the results of a simple experiment at the annual meeting of the AAAS - The American Association for the Advancement of Science.

She filled up glass jars with different types of gases, including water vapour and carbon dioxide, and put them out in the sun. She then measured how much each jar heated up.

In her own words, "the highest effect I have found to be in carbonic acid gas" - that's what they used to call carbon dioxide back then.

She went on to say, "an atmosphere of that gas would give our earth a high temperature; and if as some suppose, at one period of its history the air had mixed with it a larger proportion than at present, an increased temperature from its own action must necessarily have resulted" - in other words, if there were more carbon dioxide in the atmosphere, then it would trap more heat, and the earth would be warmer.

Next year, I'm attending the annual meeting of the American Association for the Advancement of Science. There will be plenty of talk about the latest, cutting-edge research. But the coolest thing is this: that the basic science connecting carbon dioxide to a warming planet is 160 years

Eli's analysis of Foote's experiment and observations rests on three platforms.  First the observation of the solar spectrum at the surface of the Earth

The absorption of water vapor and CO2 in this spectrum are what are called combination and overtone absorption bands where there is a change of multiple vibrational quantum numbers as a result of absorbing  visible (380 - 800 nm) or NIR (near IR > 800 nm) photons.  For example if the three vibrational modes ν1, the symmetric stretch, ν2,the bend, and ν3, the asymmetric stretch are (0,0,0) in the ground state, a transition to (0,2,0) would be an overtone and to (1,0,1) a combination band.  As a general rule overtones and combination bands are about a factor of 100 to 10000 weaker than single quantum transitions.

Readers of Rabett Run also know that there is very little flux in the solar spectrum in the IR, particularly where the CO2 bending mode is active

The bunnies need one more piece of information, the transmission of glass 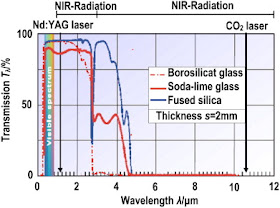 Foote used glass cylinders.  Glass cannot pass IR light beyond 4 microns.  The solar spectrum is weak beyond 2 microns.  Foote was not looking at absorption of thermal radiation from the warm surface.  She was measuring absorption in the overtone and combination bands of CO2 and H2O and a bit from the H2O stretching bands at 2.66 and 2.74 microns .

One further point, why did Foote observed a stronger effect from CO2 than H2O?  The answer is that she had a much higher partial pressure of CO2 in her containers than H2O because water vapor is condensible at 25-30 C, about 30 Torr.